The man from the forest - A story about migration, climbing and pursuit

I don’t know how many of you, who are reading this, are familiar with the act of moving away.  If done well, moving away could be a tangible and sometimes not-that-articulate action which involves and turns into real uncertainties and hopes. You’re probably more familiar with climbing.  Despite the many obsession-grades climbing has, it may be considered as a way of moving yourself through the world and society

The starting point remains one: to move away. Be bold, be positive, and move. We’re talking  about a 2-weeks unplanned climbing trip across many countries with your car - yeah, still too poor for a van - or even to migrate somewhere else because  you’ve got your reasons.

Davide, known by everybody as “il Cata” - “the Cata” - chose to play the second option. He was raised in Northern Italy, but not the place where you would picture a climber - Alps, crags everywhere,  farmers and tiny wooden huts kissed by the sun-. The outskirts of Varese are flat, surrounded by some of the most fascinating lakes in Italy, but you can only see the mountains on the horizon. 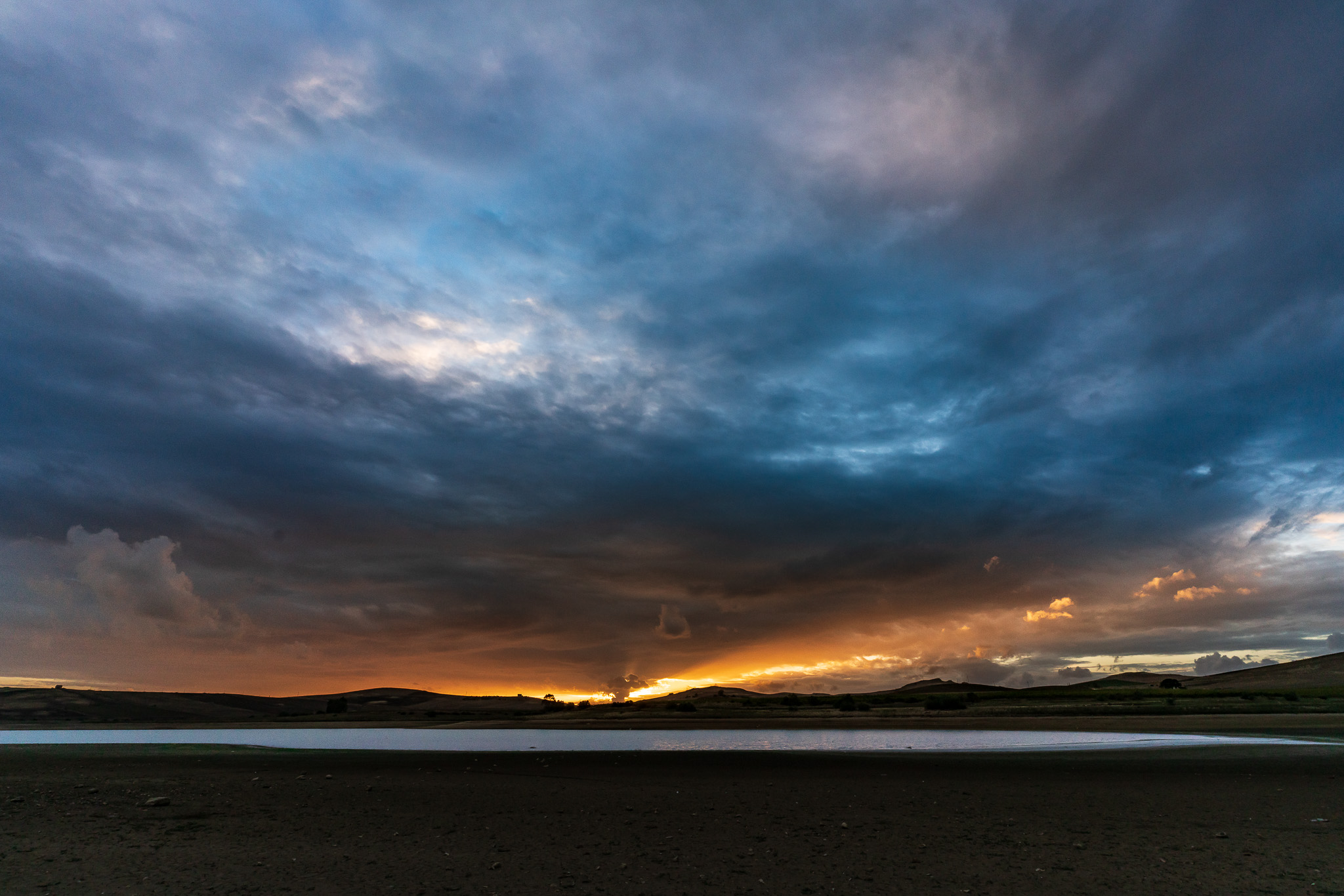 Not the place where a passionate climber would love to spend his time, especially in winter. You’ve got a good job, opportunities, a beautiful girl along, but… why not move to the Sicilian countryside? You would have fresh air, it’s always sunny, stunning landscapes, Giorgia would love  it, life is slower and you would have time to enjoy it.

You may say “What should a climber do in the countryside? In Sicily? Fair enough. But the thing you didn’t know - and that I didn’t tell you, my bad - is that Cata really loves to explore, to go off-the-beaten-track. Hard to do that in Varese!

A few years later I met him, I found Cata grilling vegetables in the backyard of his new home,  close to the tiny Sicilian town of Ummari. If you’ve ever  climbed in Sicily, you’ve probably been to San Vito Lo Capo. That’s the main climbing area in Western Sicily, with thousands of sport-climbing lines. That’s the Italian Kalymnos: sea, sun, tufas, cheap life, no worries.
‍
The sun in Ummari is the only character playing in a clear-blue sky, which seems to never witness bad weather, and it’s way quieter than San Vito. Cata travelled around the world for  some time, but in the end he came where he was planning to come.  He’s happy, and in a pure way. He seems to be part of the  environment, and the landscape as well. Like he’s always been there and you never noticed him,  this wouldn’t be as true as it is if Cata chose another place. 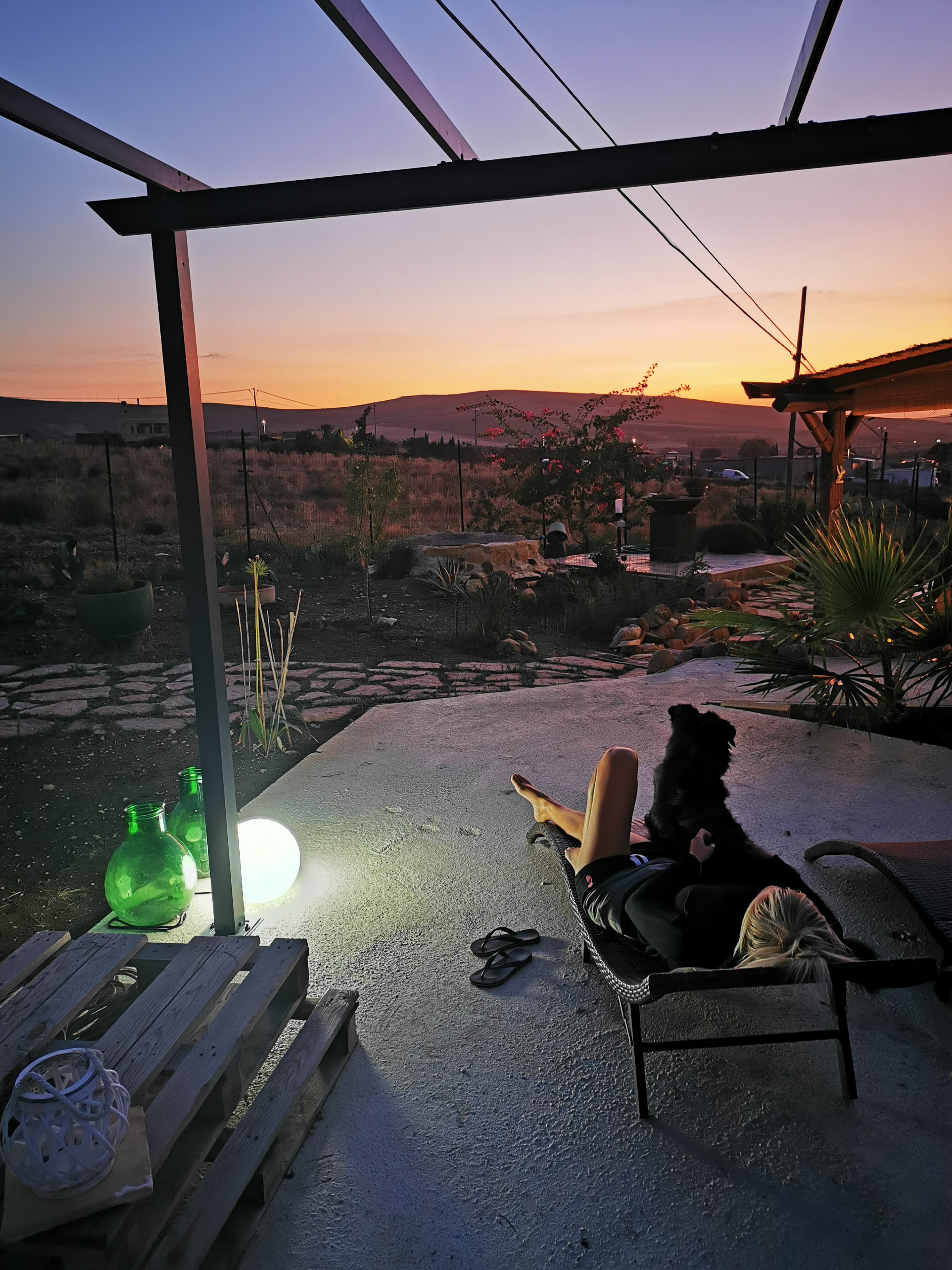 Giorgia welcomes us a few moments later, while Cata is already buzzing, showing us the outdoor  climbing wall he’s building with his hands - Climbers… they can only think about one thing - .  We spend the whole day chilling between the outside hot-tub, the barbecue, and Cata and  Giorgia’s tales about their new world, now focused around this splendid 100-year-old stone farmhouse they renovated and turned into a Bed and Breakfast they run. Guests are mostly their climbers friends, since there’s not that much tourism flow in the countryside.
‍
That’s a real shame actually, because in the last 4 years Cata cleaned up and climbed more than  130 lines from 4A to 8A on many boulders he discovered in a magical forest just in front of his  door. He actually moved here in order to develop this new climbing area, which - as we discovered during the next bouldering days - it is a real paradise for climbers. Very short approach, flat landings and beautiful beautiful movements, superb sandstone quality - almost untouched if we exclude Cata and his friends Lele and Paga - and a climbing potential still unexplored. Cata explained that he explored approximately 60% of the woods in 3 years of almost full-time work, considering here you can find good climbing conditions the whole year. Situated at 600-meters of elevation above sea level in the middle of a forest, Bosco Scorace really offers climbable conditions during the hottest sicilian summer and perfect climbing days during  winter and mid-seasons. 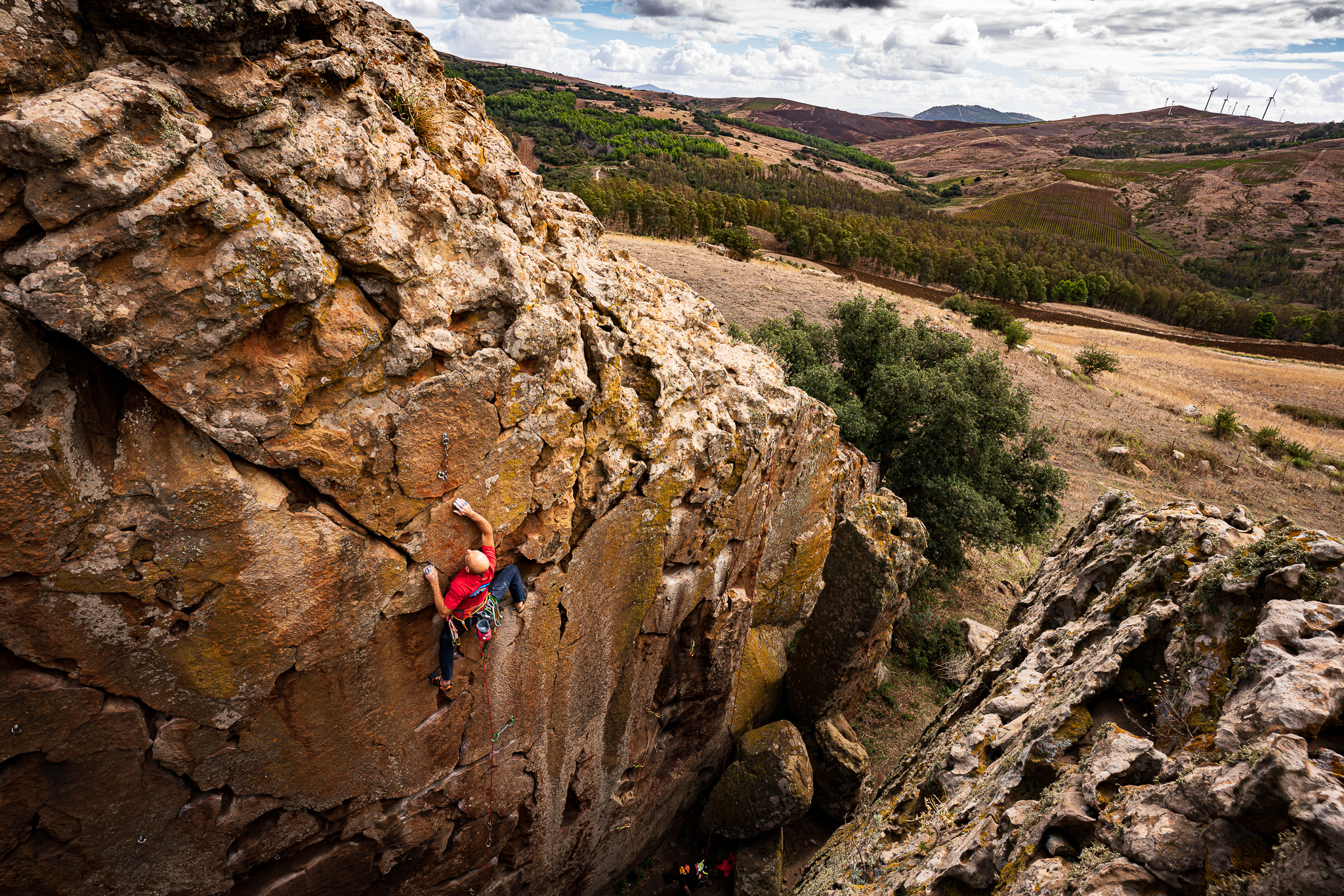 The canyon, around 15 lines entirely bolted by Cata and his friends in a giant cracked-boulder.  Here, you have to wear a fleece even in the middle of the summer.

But, still, this gem is still undiscovered by the masses.
‍
The days here flow smooth like the rare clouds in the sky and the courses on the table in the backyard. We’re in Sicily after all. And even if life seems easy, we dig deep in ourselves, especially  me. Cata is quiet: no one but him chose this life, he’s happy and he can easily run the B&B  together with Giorgia.

But you don’t spend hundreds of hours chopping bushes covered by grass,  soil and chalk just for your own climbing ambitions. You want action. You wanna explore not only  the environment around you, but also the others. And you would love to let all the other people  feel what this sense of exploration and satisfaction is about.

This bittersweet story highlights a problem. And a solution as well, right after. The fact that thousands of people flow into the same famous climbing areas every season - sometimes even  in the same crag - it’s something that over time affects the place as well as the environment.  On one hand, climbing is gold for bringing tourism to remote local communities.

But I wanna talk straight out of my teeth, after spending many hours on books and  sitting in a university classroom talking about tourism, sustainability, the circle of life of a  destination, tourism flows, tourism sustainability and so on all the time. Climbing promotes a respect for the environment, a sustainable way of life and a way to interact with things - people,  nature, other cultures… you choose -, and also promotes new tourism destinations ignored right now, because climbing has never been so popular. Nothing is perfect - “Climbing destroys flora  and fauna!!”, “You can’t drill rock and throw down loose rocks wherever you want!” - but it’s all  about how we manage the phenomenon. Last but not least, climbing offers many opportunities to  the local people and businesses. I could list many towns who are actually living out of outdoor sports 12 months a year (read: Kalymnos, Finale Ligure and so on), and they’re doing pretty well. 1 That means, potentially, climbing is a vector for sustainable and low-impact tourism.
‍
On the other hand, it’s extremely hard to make a new climbing destination thrive. Most of the time local climbers/bolters, natives and  small businesses don’t have so much money, skills or support from the local administration in order to make it happen. And that’s sad because if those people can’t change this, nobody will. 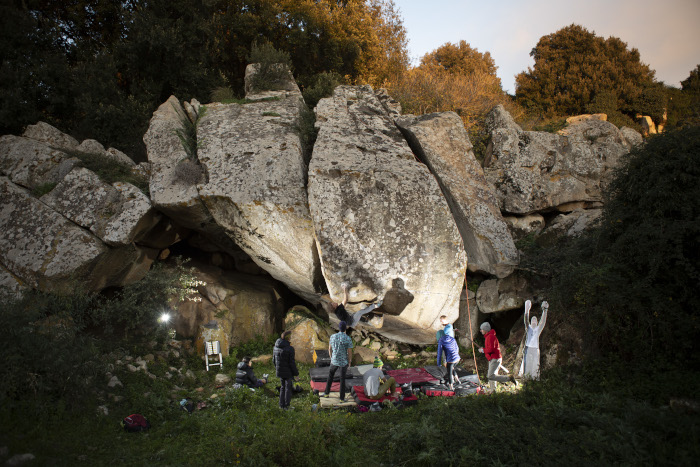 Scorace forest in the night. The act of climbing has no limits in terms of  adaptation in a different environment.

I’m not saying people who are going to Finale Ligure, Arco, Kalymnos, Ceüse, Siurana and so on  are wrong. I’m the first who’s not gonna stop to visit and interact with these places. I’m in love  with them, because they’re unique.

But I would like to let you know there’s more. There are hundreds of Finale, Arco, Kalymnos,  Ceüse, Siurana all around the world, it’s just that you ignore their existence. Western Sicily is right  below San Vito Lo Capo, but probably 97% of people who climb there - maybe planning 2 to 3  trips per year from Northern Italy/Europe - ignore the potential of Bosco Scorace and the crags  around. As well as I did before joining Mapo Tapo, a start-up focused on designing and organising  climbing trips and which aims to actually fill this gap between Cata, who can’t manage all the  things involved in the promotion of his climbing area while running his B&B and cleaning new  lines, and the creation of a more equal climbing tourism flow.

You need a few things to make this happen:
• The desire to look for different spots. Not only for your climbing ambitions, but also for the  good of the others. You should be aware that going climbing just once in another place  can be really helpful for the pub you’re going after climbing, the local groceries shop, the butcher, the bakery for the post-send cake… Who knows, maybe you get used to it. If in  doubt, bring a friend with you.
• To go off-the-beaten-path, knowing your trip is gonna be a little bit more shaped by  adventure and what's-around-the-corner mindset.
• Any climbing level. You don’t need to be Chris Sharma who explores a remote bouldering  area in Venezuela supported by tons of sponsors.
• Adaptation. While exploring places you’ve never been climbing to, you need a few days in  order to let you skin, body and mind adapt and understand which kind of climbing and  rock you’re connecting to. Plus, it’s gonna be hard to focus on one single hard project.  After all, not a single Pro-climber visited a new off-the-beaten-track area for the first time  and started projecting a single streak of rock.

In my honest opinion, 1.000 climbers spread over 5 beautiful climbing destinations are better than  1.000 climbers crammed into one famous climbing spot. For the local businesses, the  environment and more equity, because I truly think climbing is one of the better ways to do  tourism. Responsibly. 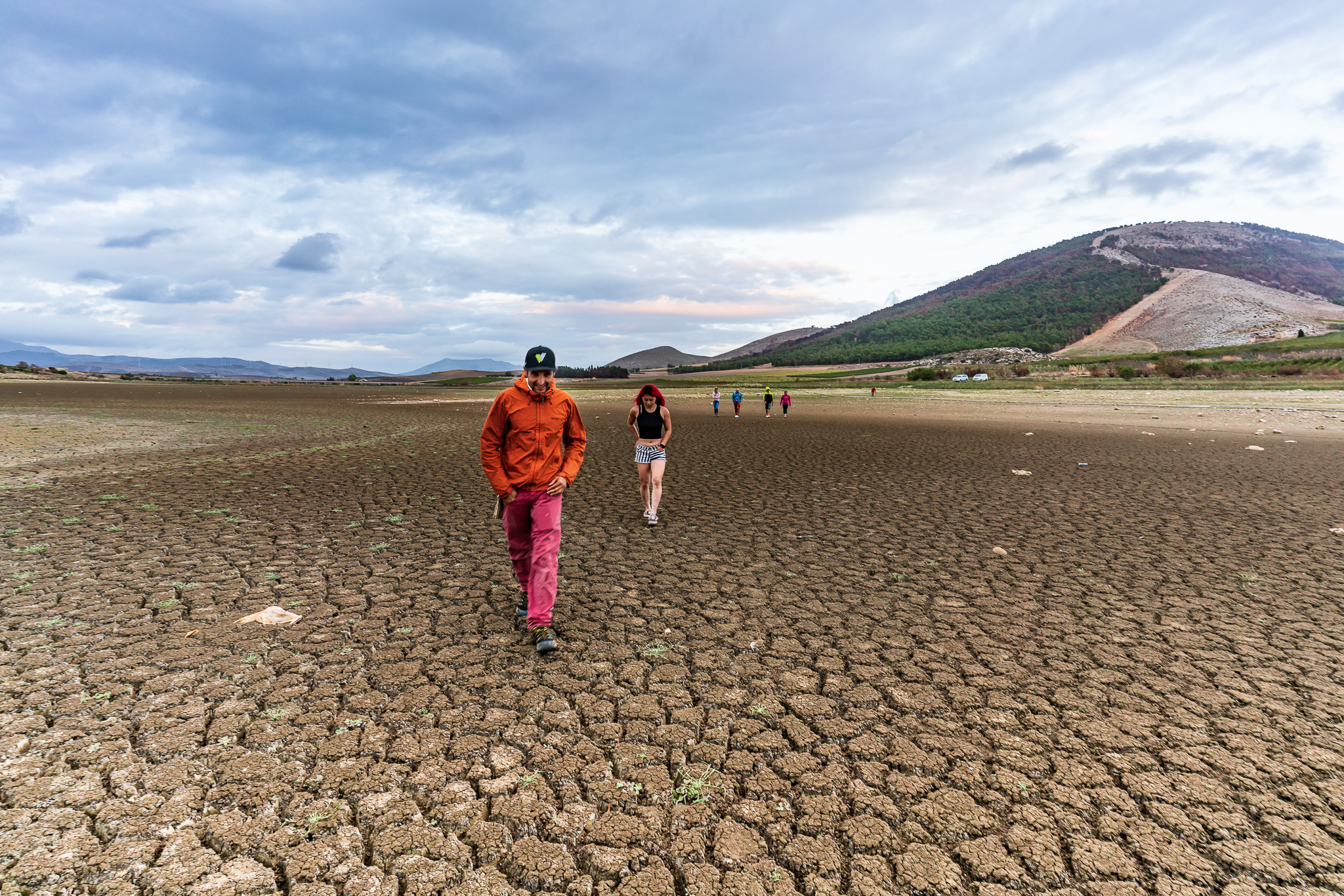 For the italian-speakers, I actually wrote my bachelor degree thesis on Finale Ligure and his climbing-related tourism 1 and evolution through the years. Hit me up at andre.palazzi@outlook.com if you’re interested in reading it.  “L'arrampicata sportiva come fulcro del processo di destagionalizzazione turistica a Finale Ligure” (Palazzi, 2016)

Outdoor and Marketing addicted, Andrea is always up for good words, hard climbs, unknown spots. In his free time you can definitely find him climbing at the crag or hiking up 4000m peaks zig zaging between crevasses.

Get the latest articles in your inbox

Thank you! Your submission has been received!

Oops! Something went wrong while submitting the form :(

A Lonely Road from Russia